Drove through New Mexico, through Alburquerque, through the night into Texas, into Sunday. Napped a bit at the state line and continued on to Amarillo. Happened to be on the 40 and passed right by Cadillac Ranch. Yes, please! Neight may, or may not, have taken a bit of liberty with the half empty spray cans that were lying around. 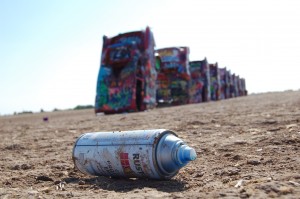 After having a bit of a break at this art site, I got to thinkin’ . . . there are art sites all over the country . . . send us a list of art sites that we should check out. Do it.

Tore into Oklahoma City — exhausted but glad. The city is being rebuilt from the ground up and there is construction everywhere and the roads are turible!!! Rattling roads + rattling art = rattling Neight and Sean. We found the A.K.A. Gallery in the Paseo Arts District and discovered that the Okies, they love their basketball – so we charged to Kinkos and waited for the basketball game to get out to hand out flyers. Gotta’ hustle I guess.

The A.K.A. Gallery is a great spot. Oklahoma City is a suprising city. A.K.A. had the work of Sarah Atlee, Ã‚Â who does phenomenally rad collage work. Each piece is heavily textured and rich with imagination.

We were nervous about the first show. Just aÃ‚Â  bit. But it went well. Sarah’s work was great. Ashley and Andrea were very welcoming and supportive. The truck unfolded as planned. And I, yes your’s truly, added a big FIND logo to the front of the truck. 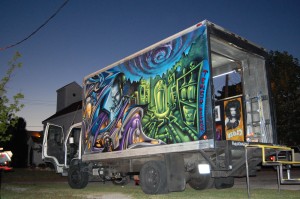 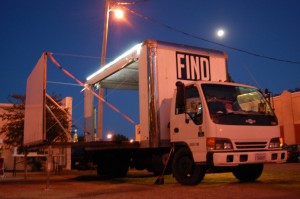 After the show, or during – I really can’t recall – I went next door to Picasso’s, aÃ‚Â bar. It was loud, so I went. You can’t blame me after the drive from OC to OKC. We were unaware that the Paseo Arts district was theÃ‚Â hangout for creative types but we met the members fromÃ‚Â Saturday Sirens, self-proclaimed desert rock artists; and a local arts and culture blogger, Ashley,Ã‚Â who asked us to check out Ali Harter and Lindsey Oleck, also musicians – I think.Ã‚Â AshleyÃ‚Â feels the Oklahoma scene is undervalued. How many scenes are there just like this all over the country that feel they need representation? I say we should recognize regional talents but not all talents need national recognition, except by those who truly wish to classify American art. That’s why there are critics, right?

After sleeping in the truck that night and waking and walking to go get coffee, we realize we are officially in the land of accents, water towers, and overalls. MOCA may have Art in the Streets but we have Art on the Road. Game on!