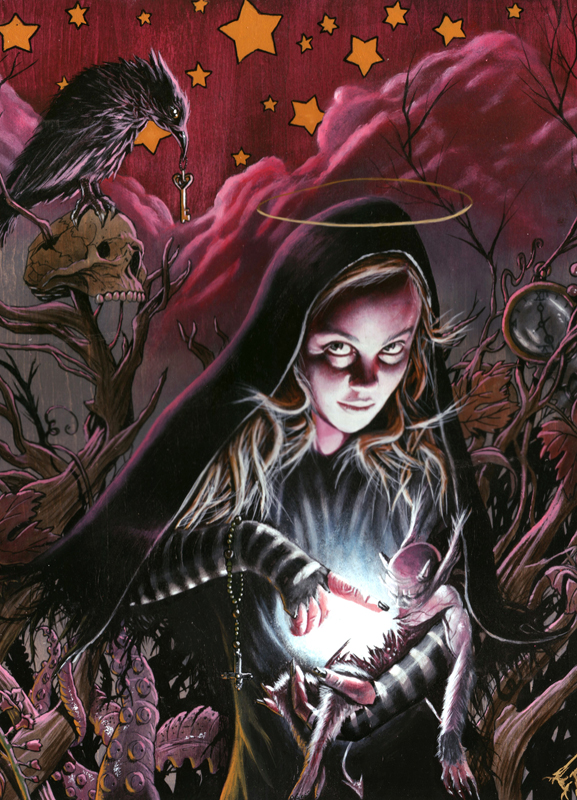 Take us back to your earliest beginnings as an artist?
I was eight years old. It was right around the time Teenage Mutant Ninja Turtle-mania was sweeping the nation and they had just released the more realistic-articulated-rubber movie versions. I snagged as many as 20 bucks could buy me. I had about three dollars left over and grabbed a pack of Marvel Universe Series 1 trading cards. This seemingly inconsequential, primal act of gathering as much as possible forever altered the course of my miniscule existence! It was the caliber of art on the cards that really got me. I didnÃ¢â‚¬â„¢t read the comics, however I collected them for the art work. I couldnÃ¢â‚¬â„¢t really understand the subtle nuances of super-powered, costume clad beings altruistically running about their adjacent cities saving people.

Tell us about your childhood…
Well I lived a tormented, tumultuous, f*cked up child hood, I wasnÃ¢â‚¬â„¢t afforded the luxury of ignorant child like bliss, the proverbial curtain was pulled back early on to reveal lifeÃ¢â‚¬â„¢s true grotesqueries: People werenÃ¢â‚¬â„¢t godÃ¢â‚¬â„¢s, heroes or altruistic at all in fact quite the contrary. MomÃ¢â‚¬â„¢s are heroin junkies and whores, fathers abandon their children, cops are corrupt and are more often motivated by some sort of misplaced-archaic racial bigotry, the justice system is flawed beyond belief and the USA as a whole suffers from delusions of grandeur.

Tell us how you Ã¢â‚¬Å“reallyÃ¢â‚¬Â feel…
America sucks, religion sucks, the general populous sucks, our health care system sucks, big-budget government spending is a slap to the face of hard working tax payers and– for all our efforts –WAR doesnÃ¢â‚¬â„¢t accomplish an f*cking thing!

Where do most of your inspirations come from?
Without question comic books of course. Then IÃ¢â‚¬â„¢d have to say depression, contempt for my fellow man, Black Metal, boredom, love, the fear of being irrelevant, the mind bending works of Nietzsche, Aleister Crowley, Anton LeVay, Jung, Stephen Hawking and Alan Moore, the art of Alex Ross, Witkin, Frank Millar, Tim Bradstreet, Mike Mignola, Jae Lee, Norman Rockwell and Dali. 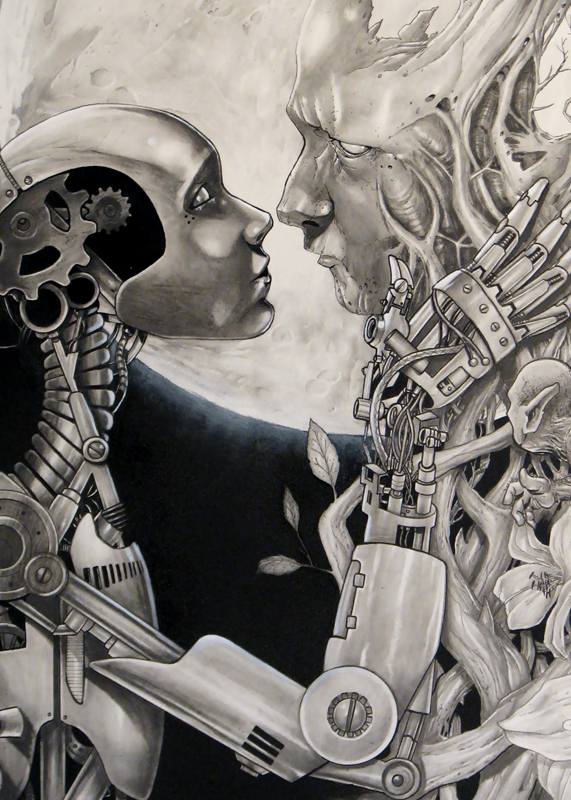 How would you describe your art to a blind person?
The world is ugly and beautiful and thatÃ¢â‚¬â„¢s how IÃ¢â‚¬â„¢d describe my art to them. IÃ¢â‚¬â„¢d tell them that my art is a balance of the grotesque-inner ugliness of mankind and the outward-exterior beauty that besets them, and then IÃ¢â‚¬â„¢d attempt to convince them with logic mind you, why they should shake loose from this overrated mortal coil.

What will we FIND you doing in the future?
IÃ¢â‚¬â„¢m going to continue doing the gallery thing. I will be a featured artist at the HIVE in L.A coming up this September. I plan on attending Comi-con this year and shopping my portfolio around, hopefully get a gig doing covers for D.C and maybe apply to Blizzard Entertainment. Really IÃ¢â‚¬â„¢d just like to create art and make a somewhat moderate living off of it.

How Ã¢â‚¬Ëœbout a great conclusion to this interview?
In conclusion reality sucks, I knew this essentially from childhood and sequentially escaped into the world ofÃ‚Â  make believe, where the world was still f*cked up, but there were good people trying to do good thingsÃ¢â‚¬Â¦.

To view more of his artwork, please visit EdwardFrausto.com