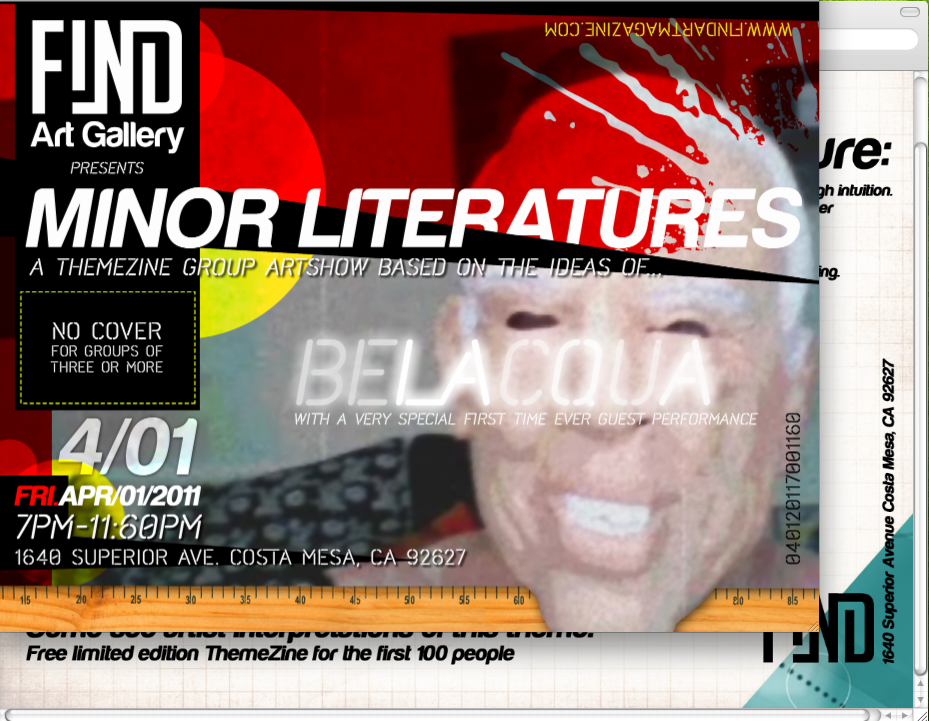 The show will be based on the ideas of the writer Belacqua.

The history of Belacqua is difficult to gauge, he wonÃ¢â‚¬â„¢t let me visit him, he sees me at predetermined places. IÃ¢â‚¬â„¢ve seen no pictures but IÃ¢â‚¬â„¢d say heÃ¢â‚¬â„¢s over 50. His health is poor after having a stroke while trying to write a pure piece of minor literature. His nurse or a health care worker wrote it for him so it’s not written at a seasoned writerÃ¢â‚¬â„¢s level. She said he was a great writer technically but never brilliant before the idea to write, “Grey Matter.Ã¢â‚¬Â The stroke was devastating for him, he says the stress of compressing language through a literary tactic known as deterritorialization, while trying to cover six, counter intuitive writing devices fractured his corpus callosum. After the stroke he couldnÃ¢â‚¬â„¢t see or speak but his right hand still scratched the outline of the story with the little bit of language capability he had left. His nurse typed for him the best she could from his scrawl-some say she actually rewrote most of it. Other theorists say she put herself into the mindset as if she had a stroke herself to interpret BelacquaÃ¢â‚¬â„¢s notes.

Belacqua shared the name the movement, based on the joy he got from a drawing by my protÃƒÂ©gÃƒÂ©. The name of the movement is the minor literature principle that Belacqua thinks made him have his stroke. Out of respect this principle can never be listed with the other six. The secret principle is the deterritorialization of language, a writing device used to subvert the expectations of language syntax and structure, Ã¢â‚¬Å“a blur, mixed-up history.Ã¢â‚¬Â Belacqua used a form of slippage in Ã¢â‚¬Å“Grey Matter,Ã¢â‚¬Â where the characters identities become unclear as he inappropriately generalizes who heÃ¢â‚¬â„¢s identifying. With general pronouns from one paragraph to another he switches character names into similar experiences making the character he puts us into at any given time unstable, forcing tension. These language functions, Deleuze and Guattari write, Ã¢â‚¬Å“can have ambiguous edges, changing borders, that differ from this or that material… Each function of language divides up in turn and carries with it multiple centers of power.Ã¢â‚¬Â Let me explain the drawing first, It was a drawing of a powerful Kore, who holds her severed breast to show her heart the light of day; that is our metaphor says Belacqua. Now, let me show you an example of deterritorialization he uses. He nameÃ¢â‚¬â„¢s the drawing described above,”huerta-ta.” He said this is the name we shall fly our flag under to describe out collective intentions. The first word looks like the Spanish name Huerta, but in lowercase. If we slowly say the word without overemphasizing the Spanish tone it sounds like Ã¢â‚¬Å“her-ta-ta,Ã¢â‚¬Â We should maintain that itÃ¢â‚¬â„¢s meaningless like DaDa and that secret is only for us who know of the unlisted principle.

Belacqua says Mad magazine and the film “Bring me the Head of Alfredo GarciaÃ¢â‚¬Â is a minor literature. Oddly, he says the film “Fight Club” has an optimistic, messiah building ending and is not a minor literature but he likes Chuck Palahniuk. Kafka is a minor literature, so is Lennie BruceÃ¢â‚¬â„¢s cartoon Ã¢â‚¬Å“Masked Man.Ã¢â‚¬Â He confuses more than he clarifies, but he opens clearings for me at times where I see the concept surrounded by the concepts. Difficult stories should be told in our difficult times. During the Great Depression Hollywood churned out fantasies for people to hide away from their real lives and the depression lingered until WWII forced the US into an unprecedented boom. We should show our ugly actions in art and writing until we see ourselves clearly and we should map out where our behaviors are leading rather than concentrating on where they are or have been. Belacqua cannot speak but dances his ideas out. The smile is permanent on his face. He follows his joy, learning to love every moment he has left and our attention gives him a jouissance that gives him courage to meet us in person.

The theme for submissions is the six points of a minor literature and will be called, “MINOR LITERATURES”

6 Major Points in a Minor Literature:

1. The hero should idiotic and morally ambiguous acting through intuition. Usually wrong in key moments, the hero is often lead by other peopleÃ¢â‚¬â„¢s influence rather than constructing their own solutions.
2. The environment or milieu is beyond human control or understanding. It crushes, blindsides and dominates the characters, regardless of the characterÃ¢â‚¬â„¢s morality.
3. The characters are flawed never learning from their mistakes. They look for god, law and righteousness to guide their actions, which fail them consistently.
4. No ending ever ties everything up neatly or is happy. We are left with more questions than answers and feelings of doom.
5. Characters should not be constructed for the viewer to identify with or find sympathetic. Every time the reader does identify with the character, the character does something entirely out of character to keep the reader from getting comfortable or familiar.
6. No major ethical issue is ever clear in right and wrong. What we should be asking is why are we even arguing about the issue in the first place. Instead we should ask the question, Ã¢â‚¬Å“Who benefits from the argument taking place?Ã¢â‚¬Â

Artwork deadlines must be finished and submitted by March 14. Painting, drawing, sculpture, video, performance, essays are welcome. There is no fee to enter.