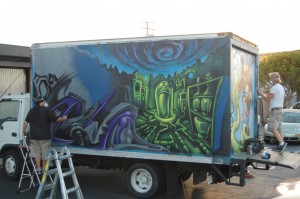 FIND Art Across America national tour. 57 cities? 14,000 miles? What are we thinking?

The preparation has us running around like The White Rabbit from Alice in Wonderland. We’re late and we haven’t even started. With so many elements, attempting to get it all in order was a labour of luck, effort, and magic. A national tour? Sure — get a truck, call some artists, day is done, right? At this exact point I don’t even know if we’re prepared and we crossed into New Mexico 50 miles ago.

We have to thank all those that helped get us on the road. Much thanks to Alex and Giovanni from So Cal Weld for the awesome build of the pop out wall that becomes our gallery floor. Thank you Bud and the OC Diesel Shop for getting the truck whipped into fighting shape. Thank you Ernie for the rubbery tires from Amato Tire. Thank you Geoffrey Doolittle for the marathon of help with wiring and final prep.
Ã‚Â
A special thank you to Lacey and The Living Room Salon & Art Gallery for hosting our send off party, Thursday the 12th, in Costa Mesa. The party was supposed to start at 1:00pm and the Dos Chinos taco truck was there with some amazing tacos – try the pork. But where was FIND? Where were we? Still building. Custom jobs never seem to be ready on schedule. We all got problems, you know? 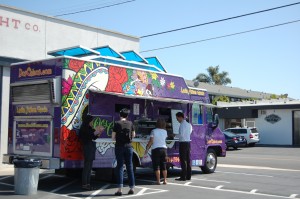 A few hours late, the truck arrived, with a working door. Jamie Johnson hopped on the roll up door to finish his piece. TEWSR quickly got down on finishing his massive wall. FIND opened up boxes and laid out all the work from artists all over the country and began installing. And, 2 pallets of magazines were dropped off just as the sun went down. Could this be a plan coming together? You friggin’ know it.

As we closed up at The Living Room, we realized we still had a lot to do. So, instead of leaving Friday morning for Phoenix, we finished the final details and made plans to drive straight to Sante Fe – 850 miles – on Saturday. 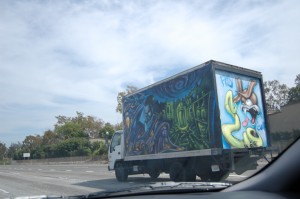 Day one – Redux: trying to make Santa Fe, NM. Saturday morning, 5 AM departure, CA, AZ, NM. Grab the list, check it twice, and GO Go GO. Neight hasn’t slept but the truck is done. I expected a flood of thoughts on the first moments of such a grand trip but there are none – only thinking about getting to Sante Fe on time. There will be plenty of time and empty road for us to think. 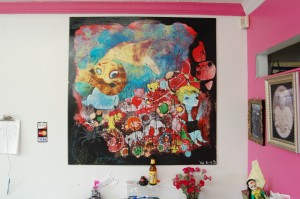 During our pit stop in Kingman, AZ, we dropped in on Mink Ink Tattoo where owner, Michelle, showed us the work of Francis Mann and her own zombie baby creations. This was officially our first stop to talk about the magazine and Michelle, her husband, and staff were all very welcoming and encouraging.

We also quickly stopped in Flagstaff,Ã‚Â AZÃ‚Â and found ourselvesÃ‚Â amidstÃ‚Â a pretty rad downtown scene full of shops, galleries, graduating seniors, and walls covered with stencils, posters, and murals. We tried to park the beast that demands 2 spots – such an ego – but couldn’t find a suitable place to open up the gallery. Instead, we canvassed the townÃ‚Â and handed outÃ‚Â some mags. We askedÃ‚Â around about the local scene and those we talked to were well-versed in the artists’ work around town.Ã‚Â Ã‚Â I think it should definitely be a planned stop for a future tour. 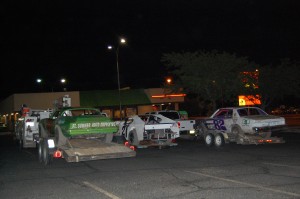 Back on the road, after our minor repairs, we are screeching across the Arizona, New Mexico highway like a possessed amalgamation of Hunter S. Thompson – at the hellish speed of 60 mph. With all the delays because of fuel economy, we are unable to make it to Sante Fe and decide to push as far as we can toward Oklahoma City. Just around midnight, we caught up on that hunger thing at a cafe in Albuquerque and listened to some local dirt-track racers recount their evening of malfunctioning cars, lap times, and near misses.

After a bit of food and plenty of coffee, we drove into Texas until Neight and I couldn’t drive anymore, indicated by the hallucinations of lights and figures in the roadway. We stopped at a rest stop just over the state border andÃ‚Â slept for a little while in the single cab box truck / mobile art galleryÃ‚Â that is our home.