My Adventures Up and Down the Ladder

Mear One is a true artist – exceptionally skilled, incredibly intelligent, totally unique, and absolutely devoted to his craft. His murals and graffiti pieces have made him world-renowned. As a graffiti artist, his work goes far beyond the typical graffiti art that we see on bridges and street corners and has been elevated into the realms of Ã¢â‚¬Å“high art.Ã¢â‚¬Â His works of art have a style and sophistication that is unmatched by any of his street art contemporaries. Mear One has had art in his life for as long as he can remember. Born to an artistic mother in Santa Cruz in 1971, he moved to Los Angeles at age three and has lived there ever since. He has been creating art for as long as he can remember. We visited Mear while he was in Los Angeles, busy creating a colossal tribute mural to artist Alphonse Mucha.

Who was Alphonse Mucha, and why did you choose to paint his portrait on a 30ft wall?
Alphonse Mucha was a late 19th, early 20th century artist, painter, and graphic designer from France. He represents an age of artists that have affected me in multitudes of ways. I feel that that his age of art was the one that produced the highest painting and was the strongest example of how people and artists can re-invent themselves and not fall into simulacrum and repetition. There were no re-doÃ¢â‚¬â„¢s, or makeovers or, carbon copies, instead, there was a lot of originality and a lot of unique thought going on. It was almost like a golden age of Renaissance thinking but modernized. People like MC Escher and Maxfield Parrish have highly influenced me and have blown-my-mind!Ã‚Â  A lot of Los AngelesÃ¢â‚¬â„¢ architecture of that era has also influenced me, like the Los Angeles Observatory, Downtown City Hall, Bullocks Wilshire Ã¢â‚¬â€œ these things are grandiose structures that IÃ¢â‚¬â„¢ve always been very close to and to the ideology behind them: science, psychology, philosophy, mathematics, symbolism and mysticism. Alphonse Mucha was the quintessential artist of this time period because he painted pure, absolute beauty! In a sense everyone loves art because itÃ¢â‚¬â„¢s beautiful, but to me, he embodies everything that is beautiful because he was able to reproduce beauty time-and-time again and view it in the most beautiful way.

There are a lot of ideas of peace and love in your work; do you think that your work has a positive effect on people?
Absolutely! Although sometimes I paint really negative shit Ã¢â‚¬â€œnightmarish images of violence, death, plague, famine, and deterioration to shock people. I want my work to be like looking in a mirror. If you donÃ¢â‚¬â„¢t like what you see then you have to change yourself Ã¢â‚¬â€œ itÃ¢â‚¬â„¢s a reminder to redefine oneself and ones reality, or at least to question it, or to ask a question, or to become serious! If I can inspire people to look inwardly, or at least involve themselves in a conversation that asks questions, then I feel that my work has had a positive effect and the purpose of my piece is complete. I can then move onto the next one!

At what point in your career did you realize that youÃ¢â‚¬â„¢d made it as an artist?
I guess in about 1991 Ã¢â‚¬â€œ when I was doing the Con Art t-shirts and the Guns nÃ¢â‚¬â„¢ Roses imagery. I was also creating storefronts and interiors and designing furniture for stores in Beverly Hills and doing all kinds of other crazy shit on an independent level that I considered successful. But you know, you have a dream of what success is. You reach points within it but your perspective on success continually changes. Eventually you come full circle until now, through my adventures up and down the ladder, IÃ¢â‚¬â„¢m on my way to finishing the mural of my life. IÃ¢â‚¬â„¢m at a point now where I just spend all my time painting. Getting here has meant sacrificing a lot of my personal life to be able to do that. Times are tough. I donÃ¢â‚¬â„¢t paint cheap work Ã¢â‚¬â€œ itÃ¢â‚¬â„¢s all heavy-duty involved work. I need money to pay for this stuff and these are tough times where these pieces arenÃ¢â‚¬â„¢t selling! But no matter how I look at it, IÃ¢â‚¬â„¢m doing what I love doing and IÃ¢â‚¬â„¢ll sacrifice anything to be able to spend the time doing the art that means so much to me; IÃ¢â‚¬â„¢ve sacrificed making money, fixing my car, and even eating some days! But thatÃ¢â‚¬â„¢s okay because at the end of the day I have the colors that I want, the brushes I need, the spray paint I want, and the wall I need. The things that I really love, IÃ¢â‚¬â„¢ve always got that shit! ItÃ¢â‚¬â„¢s interesting what success is; been there, done that and then come back to the streets, then off the streets to do other things, and then back to the streets again! And I find myself always coming back to my roots in graffiti art, vandalism, and big productions Ã¢â‚¬â€œ doing art that isnÃ¢â‚¬â„¢t thought up by someone else. Creating art thatÃ¢â‚¬â„¢s thought up by me and illustrates the things that I think about and how I perceive the world around me. ItÃ¢â‚¬â„¢s not like this project thatÃ¢â‚¬â„¢s funded by corporate thinking Ã¢â‚¬â€œ itÃ¢â‚¬â„¢s all coming from me. I feel that IÃ¢â‚¬â„¢m living the life of a real artist compared to those who chase money and appeal quickly!

Do you think that street art has become more acceptable now, or is it still just as rebellious as ever?
Yeah, dude, that shit is popular as fuck! ItÃ¢â‚¬â„¢s pretty much influenced everything around us. The art form that started in a spraycan that was this super-urban rebellious thing is now just a form of advertising Ã¢â‚¬â€œ on buses and everywhere else! So I think that not only has it become acceptable but it also became co-opted! In some ways this is good because the entire scene that came from the streets is now considered to be a valid art form. 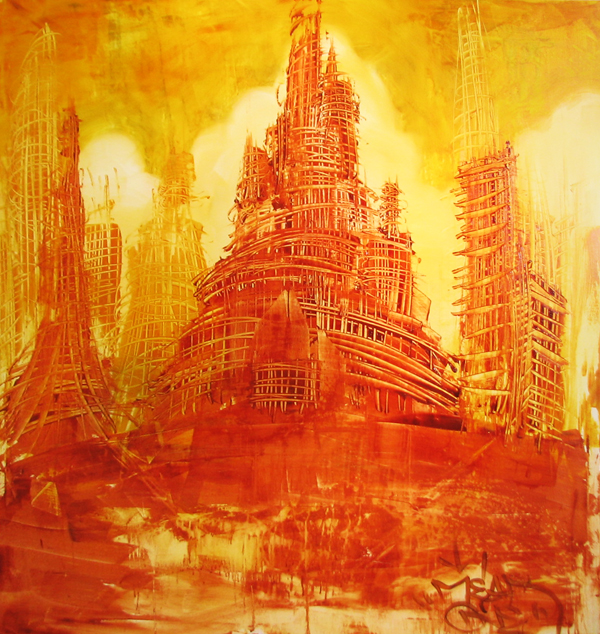 Have you ever had any run-ins with the law while doing your graffiti art?
Back in the day, I was going to jail many times for doing graffiti and it cost me hundreds and hundreds of hours in community service and money that I couldÃ¢â‚¬â„¢ve used Ã¢â‚¬â€œ having to bail myself out for my freedom! Just recently I was out with a bunch of people putting up some work and I had a run in with the cops. It was hilarious because we just told them that we were doing some promotion for Ã¢â‚¬Å“The Hollywood Propaganda Movie MachineÃ¢â‚¬Â and they said, Ã¢â‚¬Å“Oh! Okay, thatÃ¢â‚¬â„¢s cool! We thought you were vandalizing!Ã¢â‚¬Â

WhatÃ¢â‚¬â„¢s the most exciting adventure youÃ¢â‚¬â„¢ve been on involving your art?
Some adventures have been criminal and some have been glorious but they all kind of blur together. The whole thing is the adventure! When you go to sleep at night that doesnÃ¢â‚¬â„¢t mean the adventureÃ¢â‚¬â„¢s over, youÃ¢â‚¬â„¢re just dreaming, and then you get back up in the morning and your back to living again! The whole memory is the whole adventure! 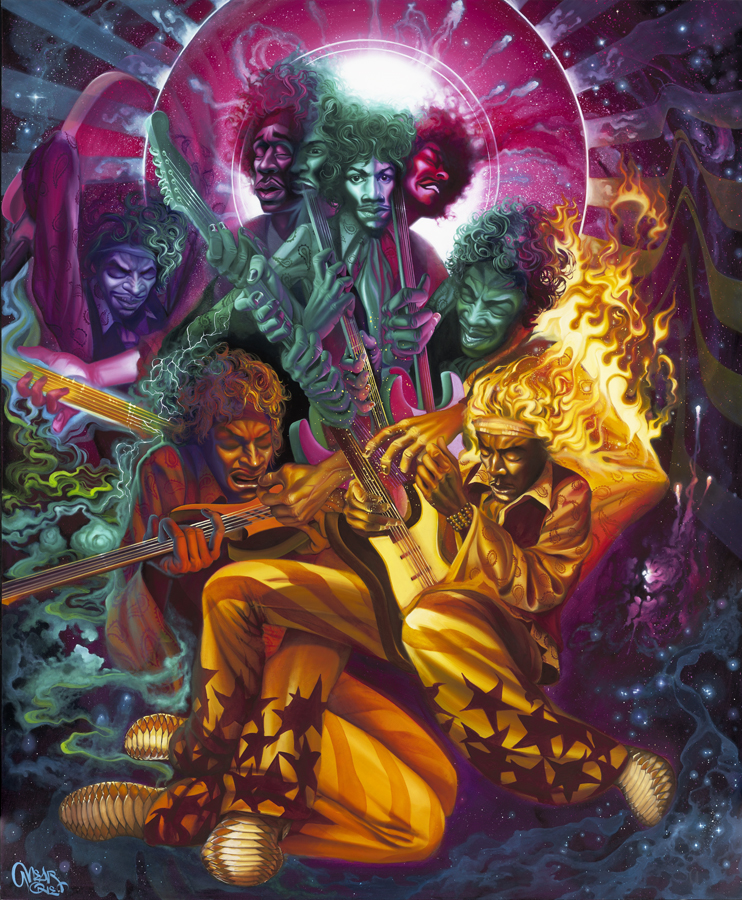 YouÃ¢â‚¬â„¢ve dedicated and devoted your life to painting. Have you ever had a Ã¢â‚¬Å“regular jobÃ¢â‚¬Â?
My first real job was working in a shitty movie theater in LA; carrying bags of popcorn, showing people to their seats and other shit like that. I probably watched a hundred movies in a row! Then I got a job in a restaurant and got fired for drinking their alcohol. Then as a sous chef at the restaurant next door where I learned to cook but ultimately got fired for creating my own menu and not taking orders properly! At around eighteen I dropped out of high school and got seriously into graffiti art. I didnÃ¢â‚¬â„¢t have a job any longer so I had to get by Ã¢â‚¬Å“hustling all kinds-a-shitÃ¢â‚¬Â and trying to make ends meet, but it wasnÃ¢â‚¬â„¢t working so I got a job for the next 3 years working for a set building company where I learned mad skills – both artistic and social. It taught me a lot and from there, I continued to do graffiti and get jobs doing graffiti and that is how I became known.

Graffiti art is not inherently profitable. How do you bridge the gap between doing what you love and making money?
Graffiti art is all about Hustling! The point of doing it has never been to make money, although you need to eat to survive, you just have to get creative aboutÃ‚Â Ã‚Â Ã‚Â Ã‚Â  selling your work and representing yourself. You have to find a way to fit into the picture and be creative with it. IÃ¢â‚¬â„¢ve never created art for money; I create art for my feelings and my life. And I know that its good art and someone will like it. Although I donÃ¢â‚¬â„¢t believe in capitalism, IÃ¢â‚¬â„¢m not an anti-materialist either. I donÃ¢â‚¬â„¢t mind selling my work, hustling my work and showing my work at art shows. I like that reality. Creating Street art means that you donÃ¢â‚¬â„¢t necessarily have to subscribe to the whole system or go about things in the same ways that other people do. I think thatÃ¢â‚¬â„¢s also part of it Ã¢â‚¬â€œ finding a unique way of coexisting in this crazy scene. 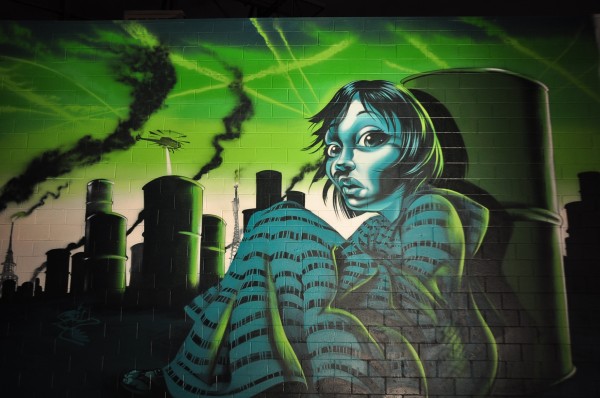 Do you have any words of advice for the young artists trying to make it out there?
Seek uniqueness and originality in your own life and the way you live your life. Let your art evolve as opposed to looking at what other people are doing or trying to make your work fit into whatÃ¢â‚¬â„¢s fashionable because thereÃ¢â‚¬â„¢s too much of that already. When everything is starting to look alike, it wears away at originality! There should be an element of innocence and honor to your work that hasnÃ¢â‚¬â„¢t been blatantly copied. We live in such a retro- reality where everything is recycled. We need to start reinventing our work so that nothing is old and everything is new.

If you could be any superhero you wish, what would your powers be?
IÃ¢â‚¬â„¢ve always dreamed that I could run up the side of buildings, that I would be this ultra-graffiti-vandal diffusing the powers of physics and using my mind to dodge bullets while leaping from rooftop to rooftop droppinÃ¢â‚¬â„¢ burners on each one at super top speeds. IÃ¢â‚¬Ëœd be like this super martial artist political assassinÃ¢â‚¬â€œA vigilante message relayer.

I think that this statement better describes MearÃ¢â‚¬â„¢s very own brilliance and superhuman artistic ability! We willÃ‚Â Ã‚Â  definitely be seeing a lot more from Mear One both in the galleries and on the galleries. You can rest assure that the next work of art he thinks up will truly be a MasterFIND. The completed mural of Alphonse Mucha can be viewed at 6th and La Brea at the Loft at LizÃ¢â‚¬â„¢s Art Gallery. It can also be viewed stop motion on his blog at mearone.com. To view & purchase artwork from Mear One, please visit www.mearone.com