The sun starts to set on Los Angeles illuminating the dust that hangs between buildings. Trash swirls in a parking lot, scraping asphalt to run free with temperate winds that dash around the side of an old brick building that faces an artists new vision. Born from prolific dreams that haunt him two weeks at a time, he remembers the atmosphere, the contrast, the drama released in the expressions of figurative incantations; which he relays in a sixty foot mural that stands next to the never ending L.A. traffic circuiting through downtowns Main Street. 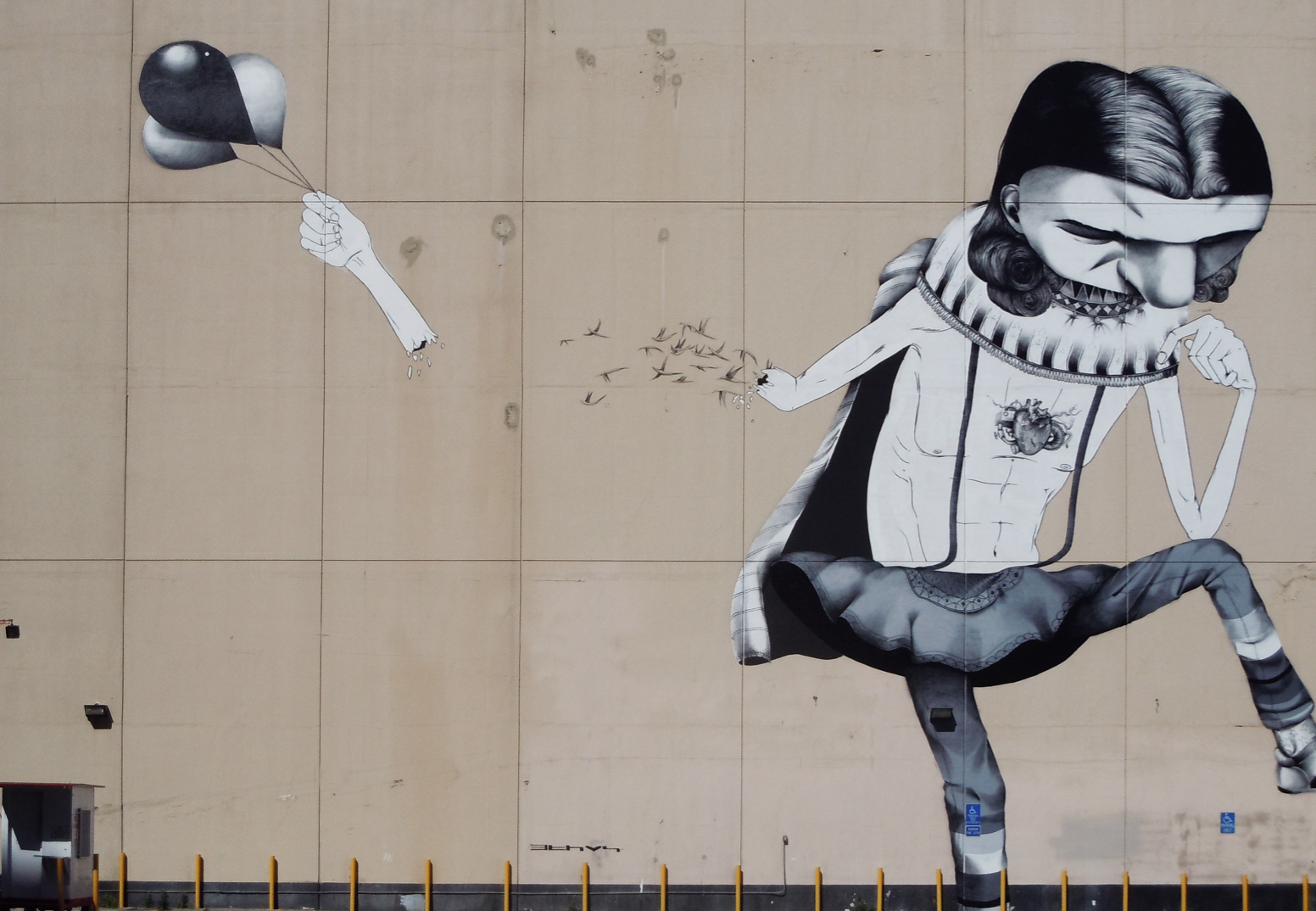 A plain white cargo truck patiently sits waiting to be transformed into a Mobile Art Gallery. Within the truck several visionaries exchange anecdotes trying to define Claudio Ethos philosophy, vision, technique, and methodology. Claudio listens patiently while he lives the moment letting his answers evolve as the words fall from his lips. He refuses to define his art, and feels as if his most memorable piece is the one that is about to be born from his subconscious. He believes art is about process, discovery, and letting go of yourself until you can wield the medium of a form unconsciously-until it feels right. There are these Balloon makers in SÃ£o PauloÂ that do not even know they are artists. These balloon makers fascinate me because they innocently spend months creating a balloon that they decorate with intricate paintings-fantastic paintings-paintings that take as much time as the ones shown in the finest galleries. They create them only to set them free, and not restrict the pure beauty of art to being confined to any one person-to be completely free of ego. That’s like an orgasm to me.

The conversation spills foreign beers pried open with a cigarette lighter, and we settle on the conclusion that SÃ£o PauloÂ is about four times the size of Los Angeles. Ever since Claudio has been here in LA, he has had nightmares. I dream of my mothers brother. He sits with me casually at first, and then, his face starts to melt. His skin slowly seeps from his face and his eyes sag out of their sockets and ripple-ebb towards the floor. This is completely scary to me each night. I love it. I love the vividness of these nightmares. Everything is so real. It’s so exciting to me.Â While Claudio could reproduce realistic images, he prefers to embrace abstractive tendencies, and explore the more spiritual side of the artistic process. Many of his figures take on characteristics of people struggling through a cramped, concrete megalopolis. His inspirations are rooted in the streets of SÃ£o PauloÂ where gangs of graffiti artists from his youth are revered as heroes stumbling masterpieces throughout the city. He does not let himself fall into categories, and rejects assertions that he is a surrealist, or has influences, or even subscribes to any one philosophy. Instead he forges his own black-and-white dreamscapes for public exhibitions, murals, and gallery shows. He does not approach the canvas with an agenda to make a statement, but lets the art manifest itself to his audience. Generated from experience, dreams, and memory Claudio Ethos remains essentially tied to an uncontrollable figurative spirit that he breaks into pieces, adjusts, and elaborates on; he blends suffused realism into detailed abstraction. 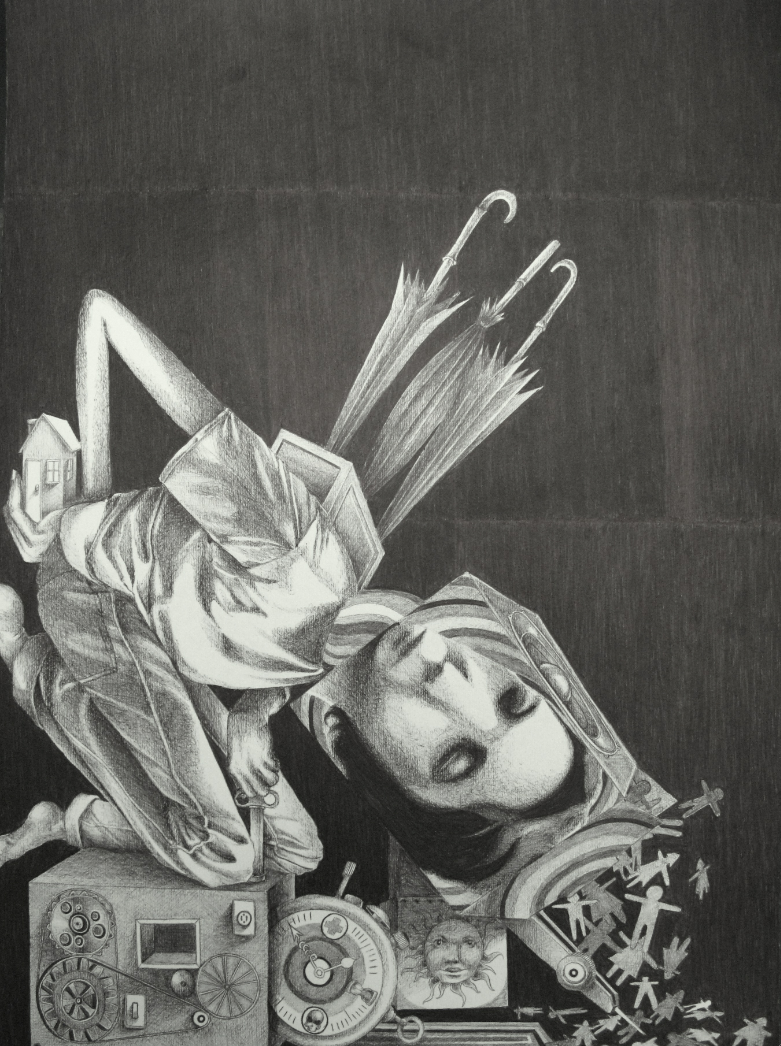 Claudio is shy about the fact that he has exhibited in Italy, France, Netherlands, Austria, The States, and Paraguay. He would never tell you that he studied formally for two years and then found it so boring that he left the arena of formal education to fervently work on art he deemed exciting. He prefers to work with dimensions closer to three meters and feels that producing art for galleries is an entirely different type of communication,Â and feels as if he is very young to the gallery scene.Â He has had five solo exhibitions to date, yet still feels as if he is somewhat restricted by the space of a gallery. Although he passionately expresses that he would like to experiment with more conceptual art in the future,Â Claudio embraces each moment as it’s own entity and slowly smiles as he grasps onto ideas that he enjoys. Exhausted from a six-day quest to paint his largest piece ever constructed, he finally gives up that he loves Max Ernst and existentialism, but asserts that it’s not the basis for his work, nor does it have any correlation to how or what he creates. Throughout talking to him one begins to understand that he passionately paints for survival, and lives through his creations physically and spiritually. Claudio’s dreams will continue to haunt audiences universally, forcing viewers to synthesize his figurative abstractions and interpret the message the art ultimately dictates. 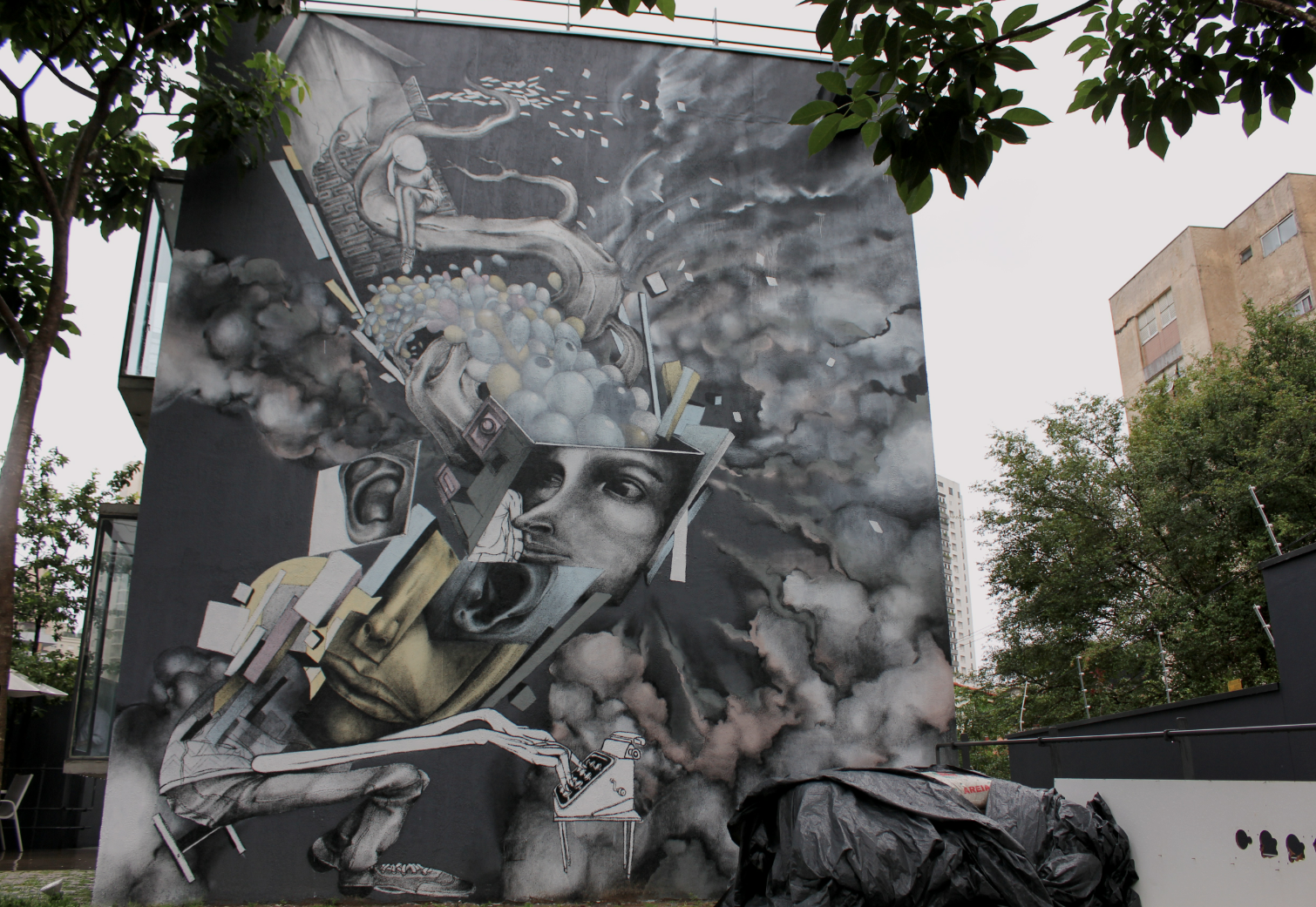 Dirty jeans fray the sidewalk of Main Street; traffic brakes dusk, and traces of the Santa Ana’s spin Spanish party dresses whipping in the window frame across from ClaudioÃ¢â‚¬â„¢s massive mural. Intrigued, inquisitive passerby’s casually drift below the hydraulic lift Claudio paints from, and suddenly he spies a lady carrying several blue, black and orange balloons. He whistles down to us pointing enthusiastically. We pan right slow motion in the sun as the wind soothes the heat; and it feels much like a dream: the lady, with the balloons; Claudio’s creation containing the same balloons. Claudio, telling us previously, with conviction, his fascination with artistic freedom, and his obsession with the balloon culture in Brazil. We stand, in between, all this circumstance and speak of art, culture, food, spirits, and dreams, and love every minute. We all share the experience of Claudio constructing his newest image, the evolution of experience married with the excitement of execution plagues all of us and we start saying goodbyes and exchanging contact information. Then, disappear into a well-lit Los Angeles, reflecting on Claudio, his humility, and the future to come. We embrace Claudio’s spirit and are certain that we will connect with him again soon. 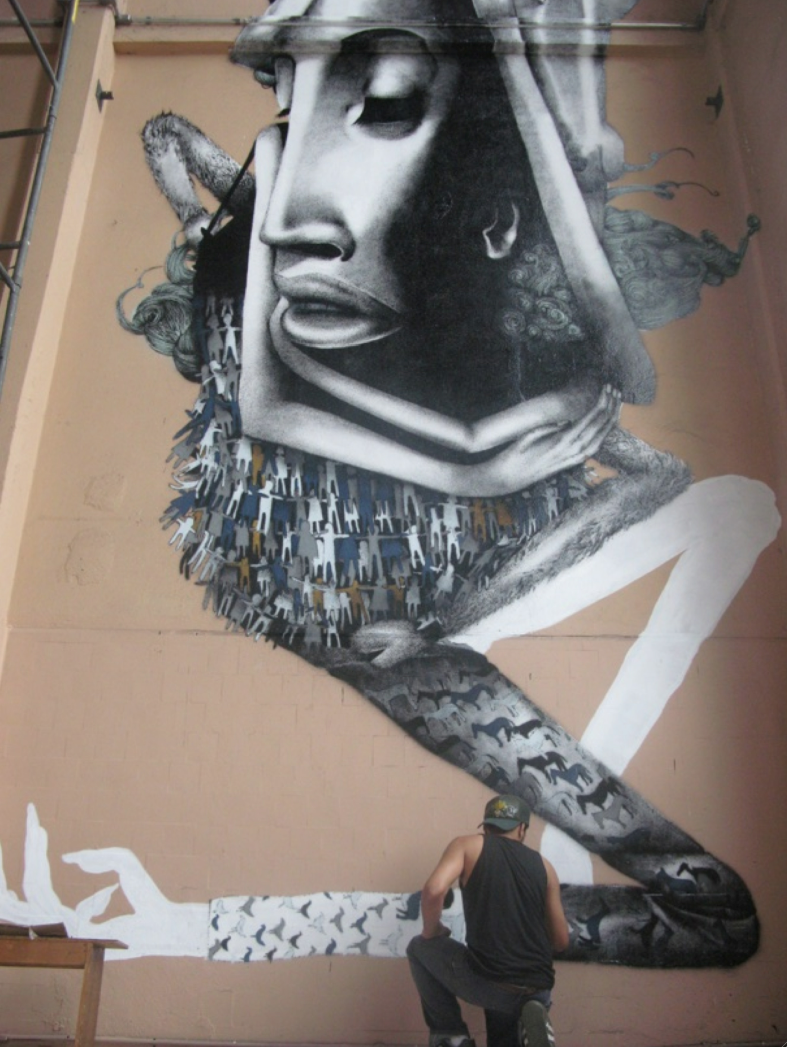 To view & purchase artwork from Claudio Ethos, please visit his website at www.claudioethos.com