“My art is emotional landscapes of a melodic symphony through color therapy, a street romantic voodoo.”

A shopping cart, piloted by a middle-aged male transient wearing long, shaggy auburn-hair, rattles down Market Street. Hydraulic bus brakes squeal as sirens bleed through an unperturbed sea of multi-cultural urbanites, cloaked in jackets, sweatshirts, and a variety of pants. Automobile motors combined with elevated trains, buses, car stereos, and construction crews fill any gap of silence one might expect. Enter CHOR BOOGIE casually toting several plastic tubs filled with an eccentric collection of spray paints cloaked in white t-shirt and faded blue jeans. Insuppressive mettle, gained in a battle won from an adolescent interim, that functioned as a phantasma of deviance, becomes the impetus for a positive addiction, a co-dependency; composing complimentary and conflicting colors. Find Art Magazine recently had an opportunity to ask Chor Boogie about his personal narrative, the growth of his technique, and what drives his perspective. 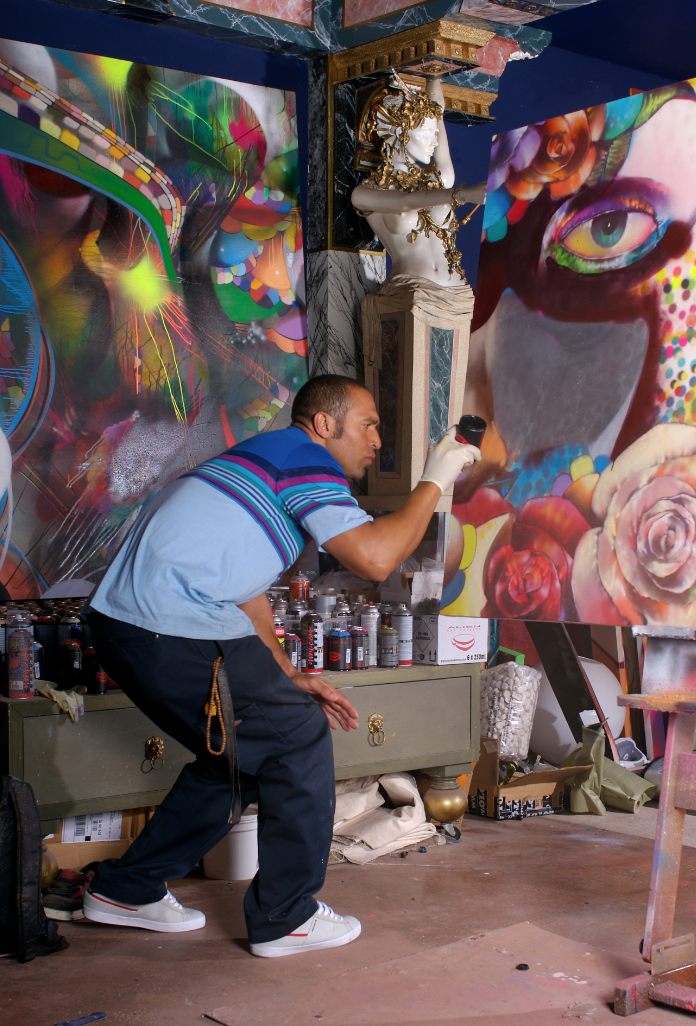 Tell us about how you developed your name.

When I got into this art-form, urban-arts culture, everyone had a nickname. I was Jason Hailey at the time, and I gave birth to Chor Boogie because I like the feeling of writing it, it was easy for me to do quickly. And this is my chore; and I get boogie with it!

How has San Francisco contributed to the evolution of your art?

I have always worked with colors, but not as fluently as when I arrived in San Francisco and worked extensively with Apex and Vulcan. Even though they are more letter form based, and I tend to gravitate more toward imagery, they were important inspirations in my development. I remember painting Turk Street when I first arrived. I was short on time and started working on another section of the wall and I was doing it really quick. I remember Vulcan looking at me and saying, So you want that to represent Â you? I said to myself, Awe shit, alright, I’ll come back and finish this correctly. Came back, completed the wall, and found this style in which I blend colors, form, and patterns to pop out specific images while incorporating realism. Say like a nose, eyes, or maybe a mouth screaming. That piece I entitled Purgatory. It was constructed near an affluent part of the city, but was a designated area for crack heads, drug addicts, and drug dealers. They were all watching us while we were beautifying this poverty stricken street. I’ve been through trials and tribulations in my life when it came to drugs; I had been clean for about six years at that point and I remember looking in and thinking: this is just purgatory. Â These transients are just stuck in the middle. Â No up. No down. Just stuck. So I called the piece Purgatory. Â Ever since then, I’ve employed the concept as a prominent theme throughout my work. 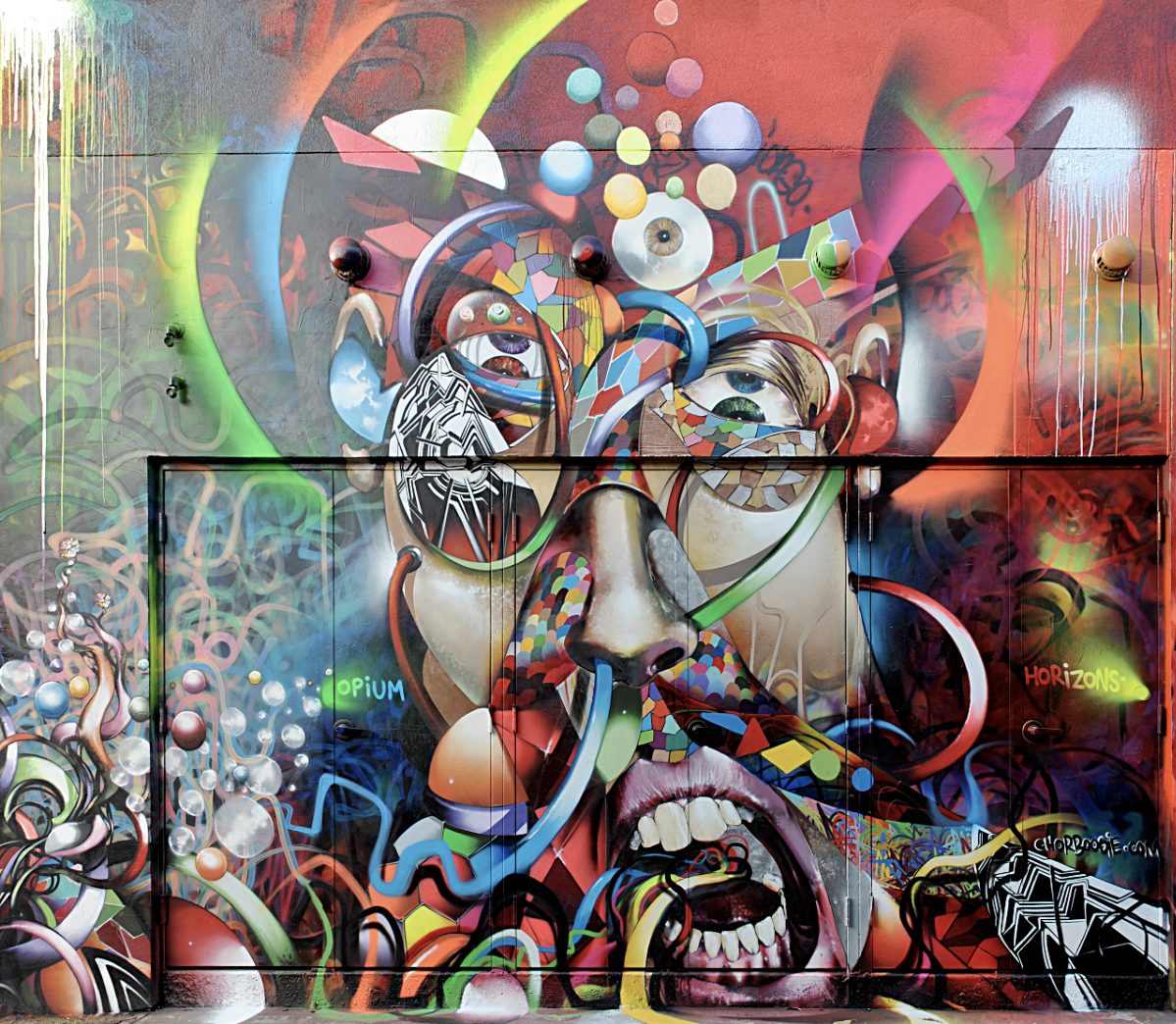 How do you consider yourself to be advancing the medium of spray paint?

By adding detail and the upside down can technique. There are no additives, there are no preservatives, I don’t use any cheat tools, and still, I am pushing my audience to consider how I achieved my overall effect, you know, to think outside the box.

Tell me about discovering the inverted can technique, and how it impacted your work.

The inverted can technique is an old school technique that originated out of the late seventies, early eighties. Artists used to utilize it for fill-ins in their letter effects, background effects in general, I knew nothing about it at the time. This was when I was living in San Diego, working for a spot called Writers Block. This one artist named Vox came through from LA, and he had some crazy technique, and I was wondering how he got all these thin lines in his pieces. At first I thought he was using a stencil cap so I hit him up, and he said, no, but try this and he showed me, and told me I should do that with my characters so I started a piece and it changed my life forever. I adopted that technique shortly after. 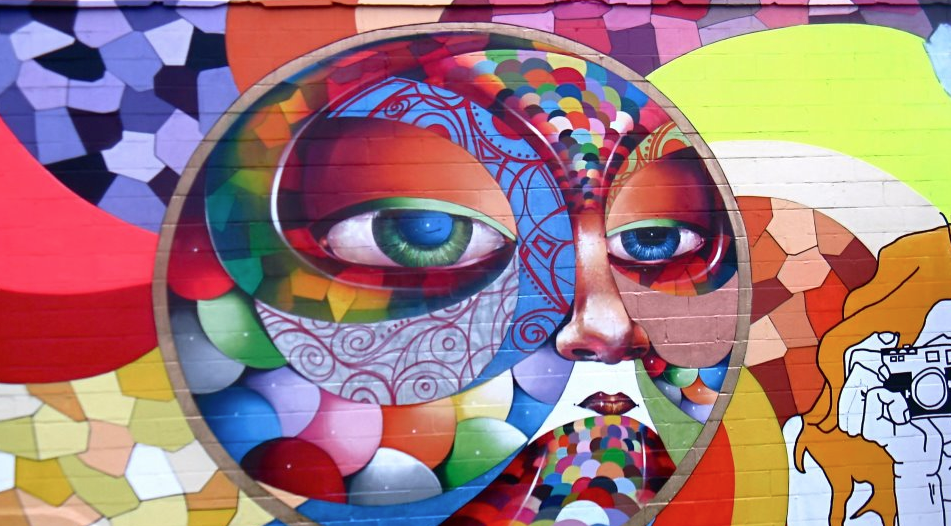 What do you mean adopted?

I mean embraced it. I took it into my own. I believed in it, and really buckled down to try to take it to a different level. By me doing that, it basically helped me achieve things that are almost impossible with a spray can when it comes to imagery. It also opened up more opportunity in terms of realism and size. Currently I claim the smallest piece in the world done with spray can, which is two inch by two inch. I think I’m going to go smaller this year, which is one inch by one inch, and that is painting my miniature Boogie Birds, all in spray paint, inverted, on little canvasses.

How do you go about composition when you’re commissioned a mural?

I basically just paint. You know, like an orchestra. Â I envision something on the wall and paint it. My style has developed within itself. I have found foundations in all the artists I’ve encountered along the way because I listen. Their words have been subconsciously imbedded in my head. I still find meaning in what they were saying in terms of form, shapes, color, proportions in portraits, and life in general. Listening is an excellent tool to get ahead in life. Sometimes, it doesn’t matter how much you know you just gotta shut up and listen.

Who do you listen to and why?

What type of message are you trying to communicate to your audience?

Originality. Originality is the key to survival. I’m a traditionalist. My art is emotional landscapes of a melodic symphony through color therapy, a street romantic voodoo. I want my audience to be free. I want my audience to have the freedom of speech, the freedom of feeling. I want to conger some feeling, any feeling within them. As long as they feel something, that’s it. Whether you had a feeling and it was pleasant or unpleasant, it really doesn’t matter, you had a feeling.

Why don’t you change your name back now that you’ve gained notoriety?

I know a lot of artists that change their name back ‘n forth, but I gave birth to Chor Boogie; and Chor Boogie will be the name I run with till the day I die.

Chor Boogie is living proof that Urban Art is still rapidly evolving. Find loves the fact that he pushes the constraints of his medium fearlessly breaking through glass ceilings that few will ever see the glare from. We believe it’s his prolific nature combined with his unique point of view that enables him to recreate himself with each piece he completes. We hope that this now third generation of urban artists graces his heels; because even though he encourages listening, he speaks as an urban sage, guiding audiences to once again consider just exactly what they are viewing. 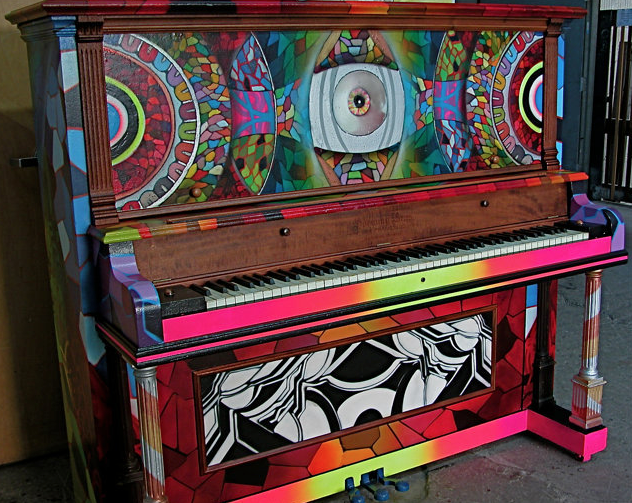 Check out the new Chor Boogie documentary coming out in 2012. www.spraypaint-themovie.com