Freddy Sam created his first mural on a wall five minutes from his house. This wall was constructed around the suburbs in South Africa because of the growing trepidation white South Africans felt towards black South Africans. This anxiety was manifested from a shift in governmental control, and many predicted a revolt resulting from the oppression that the black South Africans had been experiencing. Sam ventured out of his suburban community, past the security guards, through the streets, to an unfamiliar neighbor’s house and asked politely if he could paint a mural on his wall. In this process, he transcended class, opened dialogue between races, and fell in love with his community. Freddy Sam had found his audience. 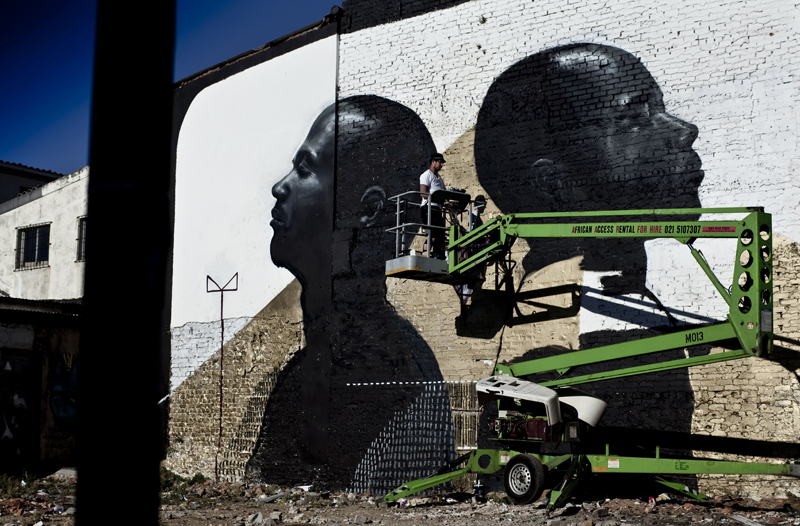 Prior to this project, he created art for purely personal satisfaction. After this first interaction as a white South African experiencing the real South Africa, he asked his parents to take him out of the school he was in, and transfer him from a private school to a public school. As an adolescent, Sam found it difficult to understand exactly what was occurring in South Africa, and more importantly, what his role was in this turbulent, politically unstable society. This first mural solidified his realization that, art was a real gift for me because I had all these complications, and frustrations within my country, and I could use art to have a more sensitive approach, to understand, learn, and dialogue. Painting on the street provided me the most direct communication with the people because I had found an avenue to talk to them. The art became a common ground, an established equality amongst the dividing socio-economics.Â 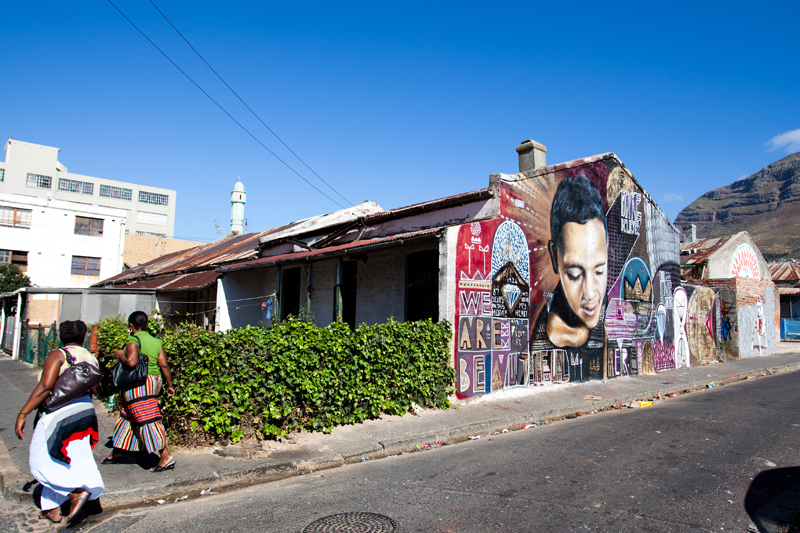 While the rest of Sam’s contemporaries attended traditional Universities, he became a socially charged entrepreneur. His scope and vision was shaped by, what I do with what I love, and how I love popular culture within South Africa. I wanted to make a lot of money so I could fund campaigns and projects that represent these philosophies that I believe in “not just meâ€ a lot of youth in South Africa believe in. Black, white, we are all striving toward equal playing ground, and want to forget about the negative history. He called his clothing line: Muthaland, and was determined to spread his message and vision throughout South Africa by finding sponsors, and completing as many different tasks as it took to run his business successfully. Unfortunately, he learned very quickly that many of his investors were only interested in selling to the masses, and cared little about his vision, philosophies, or ideals. They told me quite frankly that they were going to stop making the clothing proudly in South Africa. Start importing my products from China, sell to the 40 million black people in this country. Not someone who cares about the message on the t-shirt, but rather someone who just needs one. Sell it to them for half the price, but sell ten times more of them. What I like to call the bullshit behind the magic curtain.Â Sam soon learned that he did not want to necessarily work with all the high profile investors and requested the opportunity to buy back his stock in order to gain more creative control. Sam’s request was granted and he downscaled from twenty-six stores to six. But, these were stores that understood me. I’d rather have one hundred people who get me than one million that make me rich. That is not my objective.

Part of Sam’s entrepreneurial promotions included a street team consisting of break-dancers, musicians, and graffiti artists. These artists received free clothing in exchange for promoting his brand. He called his team: Write on Africa.Â Sam handpicked these artists ensuring each person stood for what the brand stood for. I invited graffiti artists to Johannesburg when I was eighteen to paint the first legal graffiti mural. Because it was the first technically legal graffiti mural, I got a lot of media attention.Â Because of this attention, Sam’s brand was broadcasted by several different media outlets, which, in turn, resulted in corporate companies, and established brands Ã¢â‚¬Å“requesting graffiti murals for clubs, boardrooms, backdrops, birthday parties, and university campuses. For four years Sam was a graffiti manager. He managed artists that were ambassadors of his vision.

During this time Sam did not make any money from his clothing line, but found it quite lucrative to work as an art manager. However, being an art manager was not where Sam’s convictions lied. He then partnered with a friend in effort to enable him to focus on the creative side of the business, while his partner handled general operations. Together they set up a new business called, Word of Art.Â The idea was to be freelance agents for freelance artists. So all those really talented artists, film directors, photographers, and illustrators who did not want to work for a traditional agency because they wanted to do their own thing, in their own style, would be free to do so. This gave Sam time to pitch boardrooms of advertising agencies and tell them, we were working with all these artists, but at the same time, I am the creative director and had designed a campaign for them; making use of all our brilliant artists.Â Quickly his partner urged him to capitalize, and offer his services to everyone they could find. Once again, Sam refused and held true to his vision. This resulted in a split with his partner and led Sam to other artistic endeavors.

Sam had acquired an industrial building, which had been a clothing factory, that was now half empty, because the clothing industry was being underbid and moved to China. Within this building Sam started his new project. I invited a whole bunch of other creatives-after three weeks there were seven of us, after three months there were twenty of us, after two years there were over a hundred people. For the first year the landlord told me that I was the creative director, that I have a great vision, and I should explore that vision, and that I must host events, and do it for free. The whole time I thought I had hit the jackpot because here is a patron supporting my vision. But it wasn’t. He had the idea of letting the artist create the flower garden, and then the flower garden belonged to him. So I begged him for a contract.Â 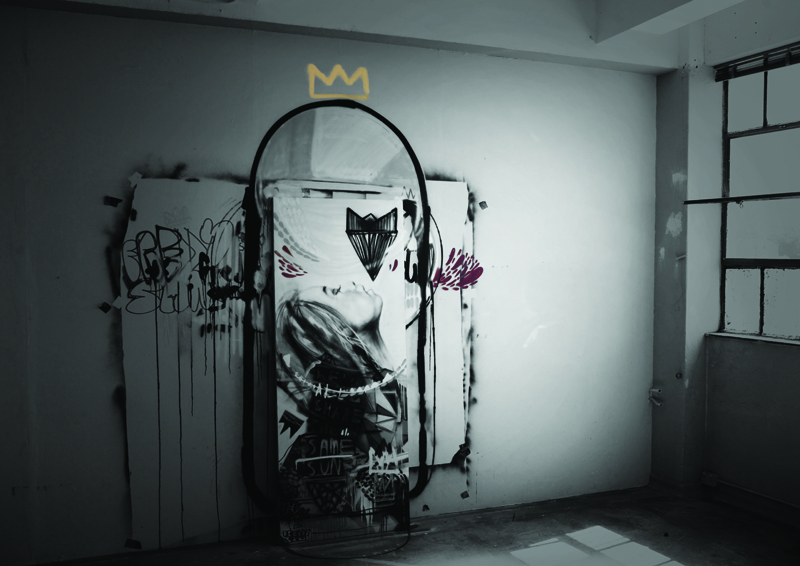 I quickly realized what we had created was very important. I started thinking if we could embrace this spirit, in ten years we could be the only building in the world that still has this artistic integrity, and the rent would still be inexpensive. Because in New York there is nothing like this, in Berlin there is nothing like this. It was specific to Cape Town. People from New York had moved to Cape Town just to be part of it. But I soon learned I would be given no contract.Â With no contract Sam still wanted to be involved as an instigator, Because building creative community is my number one passion as an artist. I get more kick out of seeing things take on a life of their own organically. Allowing things to blossom.Â

Sam currently runs a new-brow, urban art Gallery that hosts affordable exhibitions in Woodstock, South Africa. Although he does not want to be a gallerist, this does provide him a platform to build a community of artists. He wants his gallery to have an atmosphere that artists can come and create art, meet other artists, and feel the vibe. Otherwise I’m just a preacher. I want to create a space, have people interact with it, and then shift perception. Sam’s next phase is to generate money to do free art classes in his gallery in support of two contemporaries: Jim and Willard from Zimbabwe. Their passion is teaching children to paint workshop facilitating, and he would like to help them find a career in this. They do pop up art seminars from their car during the week, then have a gallery show on Saturday, and it’s sustainable. If you want to be involved, you come to the exhibit. Not like send me money, or help me with the PR. I’m not interested in thatÃ¢â‚¬Â¦.that will come, if someone really wants to make a difference, they can come meet one of the kids. 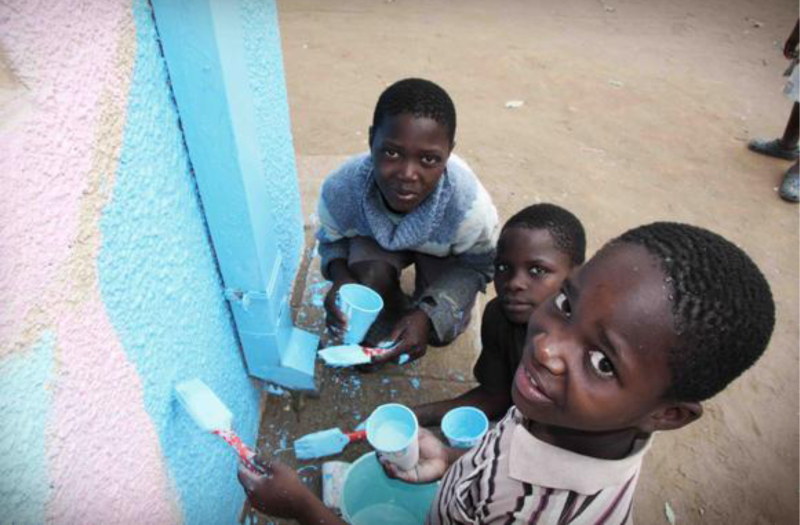 Sam also is concerned with proving art that can make a difference in his community, and is taking a very scientific approach: A close friend of mine came to me with this idea. There are thirteen schools in South Africa with a zero percent pass rate, which means no one is passing an all time low. There are rural schools, meaning some kids walk barefoot for three hours just to come to school. Furthermore, there are schools in the city with the same problem. What if we had an international project in which we had thirty artists from around the world; and within one month we went on a road trip and we hit every school and we painted them: classrooms, corridors, inside, outside, an extreme makeover. I want to paint these thirteen schools and go back in one year and see if there is any pass rate. If there is one pass rate we have proved there is one per cent change.Â Ultimately, Sam is looking for this to be a global art project in which 50,000 participants look at one problem, a case study; can growth be shown where art is employed as the chief tool for change?

Sam’s artistic philosophy stems from the attitude that, Ã¢â‚¬Å“Africa will teach the world simple philosophies: goodness, communities, family, right, wrong on a very simple basis. The world we live in now has lost sight of what is right and what is wrong. But in the village it’s very simple. I love that, and I want to promote that, and the way I know how to do that is through art. Sam is not taking native African art and exporting it. But applying it to his community, which entails creating public art to inspire social change. 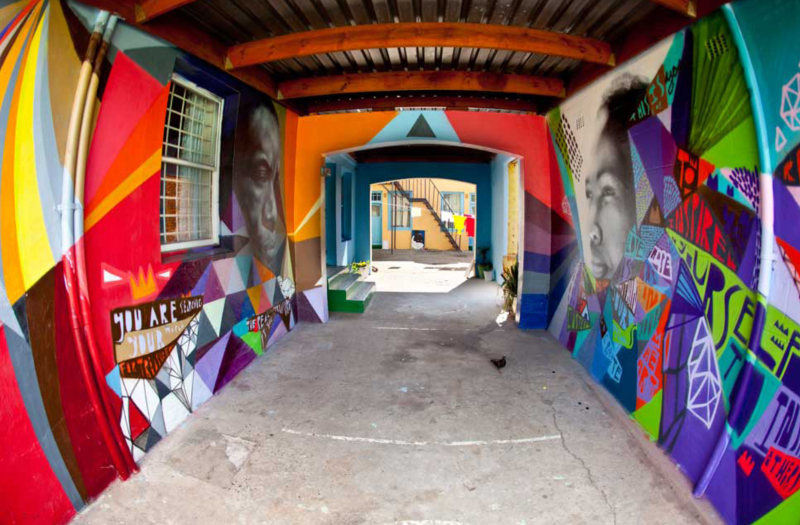 Ã¢â‚¬Å“I think art is a catalyst for change. A lot of the art we see today has to do with popular culture. It’s a bit recycled, a bit washed out, but it’s aesthetically pleasing, and we can identify with this because we are so used to all these images in our life, and when someone reproduces that in an art form, it’s easy, it’s accessible, I get it. If there is a punch line, or if there is not a punch line, if I like the colors, or if I like the graphic, it’s modern, you know? But I think there needs to be a revolution in art concerning substance. Can art make a difference? Can we use radical ideas for radical change in the world we live in? Maybe the solution is radical. At the moment the world views art as it’s number one phenomenon. More and more people are becoming artists, it’s the new rock star, but on the same side, do we need more rock stars, or do we need more Bob Dylans? Perhaps we need to look at the world more as a marathon race, and not as a sprint. Perhaps we need to preserve our culture. There needs to be more jazz in this world. Jazz in the sense of real emotion, sensitivity, and rawness in what we produce in art being reflective of us as humans and honest with ourselves. Simply put: we need to inspire ourselves, to inspire others, to create change.Ã¢â‚¬Â 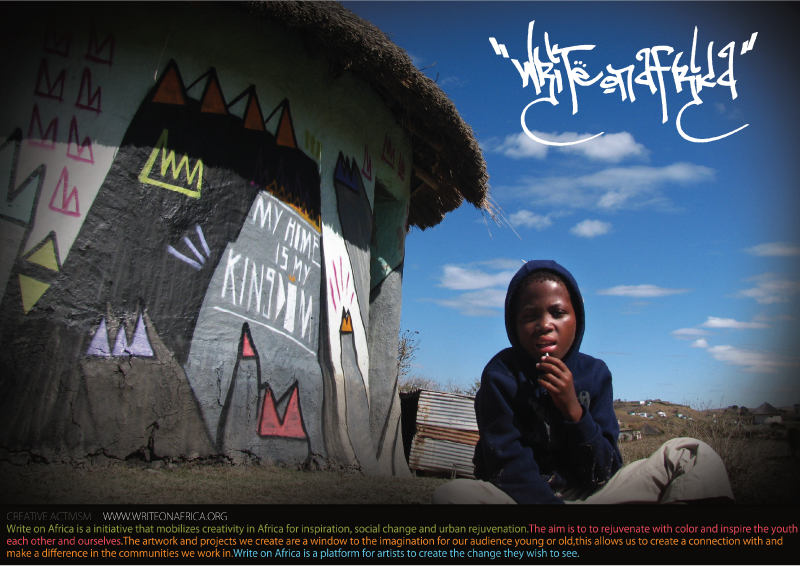 Freddy Sam was brought to Southern California by a grant sponsored by the Do ArT Foundation. To view & purchase artwork from Freddy Sam and get more information about his founderies, please visit: www.freddysam.com | www.writeonafrica.org | www.a-word-of-art.co.za